Abstract: Over 2 Billion people are estimated to suffer from a disease of the Central Nervous System. Half the people satisfying the criteria for either dementia or depression have never received a diagnosis. US$ 40 Billion per year are invested on pharmaceutical compounds, 100 Million sentient vertebrates are sacrificed in the process, and only in 6% of cases do pharmaceutical drugs get tested in expensive clinical trials, which a third of approved patients end up abandoning while the other two thirds produce unreliable assessments about their internal states. Of the compounds that are approved, many have devastating side effects.

On July 7th 2012, the Cambridge Declaration on Consciousness was ratified by an international expert panel of neuroscientists, including neurophysiologists, behaviorists, computational neuroscientists, cognitive neuroscientists, neuroanatomists and neuropharmacologists in Cambridge, UK. This document summarizes decades of peer reviewed research presented at the Francis Crick Memorial Conference on Consciousness in Human and Non-Human Animals, and rebukes the Cartesian notion that non-human animals are mere biological machines devoid of states for which consciousness is necessary, including feeling states. These observations bring to bear the utmost urgency to accelerate the development and adoption of ethical and more affordable and effective alternatives to invasive nonhuman testing and to rigorously regulate the latter. In this lecture, examples of non-invasive neurobiological techniques for translational research which do not require the sacrifice of experimental animals will be presented.
An advanced human-based wireless non-invasive neurotechnology will be introduced as a tested paradigm to accelerate human pharmaceutical clinical trials, enabling some of the world’s largest pharmaceutical companies to gather significant information about the brain and its responses, in a home based environment and at lower cost. Specifically, the successful application of such neurotechnology on pathologies such as Autism, Down Syndrome, Insomnia, OCD, PTSD and TBI will be discussed. The deployment of this neurotechnology as a “computational patch” for Locked-In Syndrome, as well for the remote tracking of astronauts, will be presented. The novel iBrain 3, the World’s smallest brain monitor, will also be discussed. 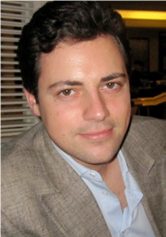 Abstract: Mass spectrometers, coupled with high- or ultra-performance chromatographic techniques, allow the detection of thousands of small molecules in a single sample, however their efficient and reliable identification is still a major bottleneck. Despite the overstated claims published in scientific literature, no more than 10-15% of compounds can be reliably identified in a complex sample of biological origin at the ppb level. Many of the unidentified compounds are not entirely unknown to the chemical world, however their true identity in a particular probe remains elusive since their reference spectra are not available. There is also a growing concern that even those compounds reported as positively identified are in fact incorrect annotations confused with either structural isomers displaying similar fragmentation patterns, or even with structurally unrelated isobaric compounds sharing only common elemental composition. Some emerging “de novo” identification computer programs are likely to contribute to the inaccuracies, since they often apply proteomic-like fragmentation principles or use purely combinatorial bond-breaking logic, although small molecules definitively do not fragment in a uniform manner and often undergo non-trivial electron displacements or complex rearrangements.
Even though many reported “automated” structure annotation methods did not hold the promise that might have been hoped for, there are functional ways that can assist in the identification of a vast number of unknowns, which will be presented. Those methods are based on heuristic, machine learning and big data approaches based on knowledge and experimental data accumulated over decades of scientific research. In addition, the methodological challenges that mass spectrometrists are facing when aiming to overcome the identification bottleneck will be discussed.

Abstract:  Methanol is one of the most widely used toxic alcohols throughout the world. Mass or cluster acute methanol poisonings as a result of its use as a cheap substitute for ethanol occur frequently globally. We performed a prospective cohort study of 50 patients who survived acute methanol poisoning during the Czech Republic mass methanol poisoning outbreak in 2012. The clinical examination protocol in survivors 3–8 months, 2 years and four-five years after discharge included magnetic resonance (MR) imaging of the brain, SPECT of the brain with DaT-Scan, complete ocular examination and standard ophthalmic tests, optical coherence tomography (OCT) with retinal nerve fibers layer (RNFL) thickness evaluation, visual evoked potentials (VEP), neurological and neuropsychological examinations, and series of biochemical tests.
The prevalence of long-term visual sequelae of methanol poisoning in our study was significantly higher than the prevalence of visual disturbances at the time of discharge from hospitals after acute methanol intoxication, when the ophthalmological examination has not been routinely performed. Altogether, 40% of examined patients had abnormal morphological and functional findings complying with the criteria of long-term visual damage due to acute methanol poisoning at the follow-up examination 3–8 months after discharge. We found functional evidence of remyelination of the optic nerve over at least two consecutive years after acute methanol-induced optic neuropathy. The process of remyelination occurred in the cases of mild to moderate damage of myelin sheaths in the optic nerve. No improvement of conductivity was found in severe cases. Both the severity of initial myelin damage and the dynamics of remyelination were associated with degree of metabolic acidosis and severity of methanol poisoning. The functional evidence of axonal loss was found in 26% of the patients after methanol-induced optic neuropathy. No patients with initial abnormal amplitudes of evoked complex recovered to normal values. In 5–9% of patients initially normal amplitudes became abnormal and in a further 7% the abnormal amplitudes deteriorated during a two-year follow-up period indicating the chronic process of neuronal degeneration.
The prevalence of long-term CNS sequelae of acute methanol poisoning was clearly underestimated at discharge from hospital, when a brain imaging examination was not performed. MR examination at follow-up revealed brain lesions in 52% of the survivors in our study, mostly bilateral necrosis of the putamen; other vulnerable regions were the globus pallidus, brainstem, and subcortical white matter, mainly in the frontal and parieto-occipital regions. Brain hemorrhagic lesions were more prevalent than the non-hemorrhagic ones, with two thirds (63%) of all cases with CNS sequelae detected with MR of the brain. No association between brain hemorrhages and systemic anticoagulation during dialysis was found: brain hemorrhages occurred in patients with and without systemic anticoagulation. Although the CT/MR features of necrotic lesions in the basal ganglia could already be found within the first 2–3 days of hospitalization, the hemorrhagic constituent evidently appeared later, sometimes after 10–14 days of hospitalization, as the final stage of the developing pathologic process, even though formic acid was eliminated by dialysis during the first hours of hospitalization.